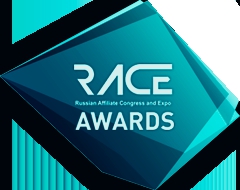 RACE Awards once again brought together in one place the leading players of the affiliate market. At the most significant event of the internet marketing of the Russian Federation the results of the year were reviewed.

Summing up the results of the affiliate activity took place on October 3 at Moscow restaurant Radio City within the framework of the exhibition and conference RACE. A statuette as a sign of quality and trust from customers in different categories was awarded to the following companies: ALTA VISTA TRADING LIMITED, MONEYMAN, ANYWAYANYDAY, SEREPUTATION, KMA LTD, ADMITAD GMBH, Affiliate Network ADVERTSTAR, OPTIMISM.RU, MAMBA CJSC, COMAGIC, VSEM MIROM LLC. The professionals in the affiliate marketing in Russia were also awarded. Rimma KHVOROSTOVA became the "Best Affiliate Manager" and the award the "Best Forex Broker in the Market of Affiliate Programs" was given to the representative of EXNESS. For further information about those who worked on the development of the affiliate industry, as well as the photo report on the event, please visit: race-expo.ru.

At RACE Awards 2014 the leaders of the affiliate industry not only communicated with colleagues, but also had a rest in an informal setting. Natalia Dvoryanova, a curator of the exhibition RACE, within the framework of which the awards ceremony was held, said: "The affiliate marketing in Russia continues to grow. That is why the number of nominations and awards has increased. On behalf of the organizers of this grand event, an international exhibition company Smile Expo, I congratulate all the winners. We are confident that in the next year more market players will receive statuettes. See you at RACE Awards 2015!"